Here is a selected portfolio of Learning Through the Arts® (LTTA)  projects.

For more information about this creative learning experience click here. 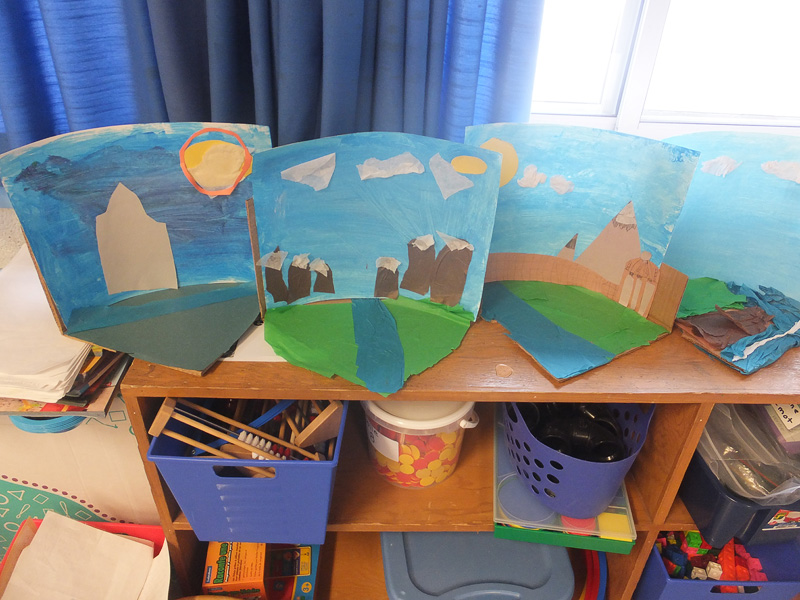 The students chose a country they wanted to investigate.  They created a small diorama which included landforms, climate and will ultimately include culture, food and clothing 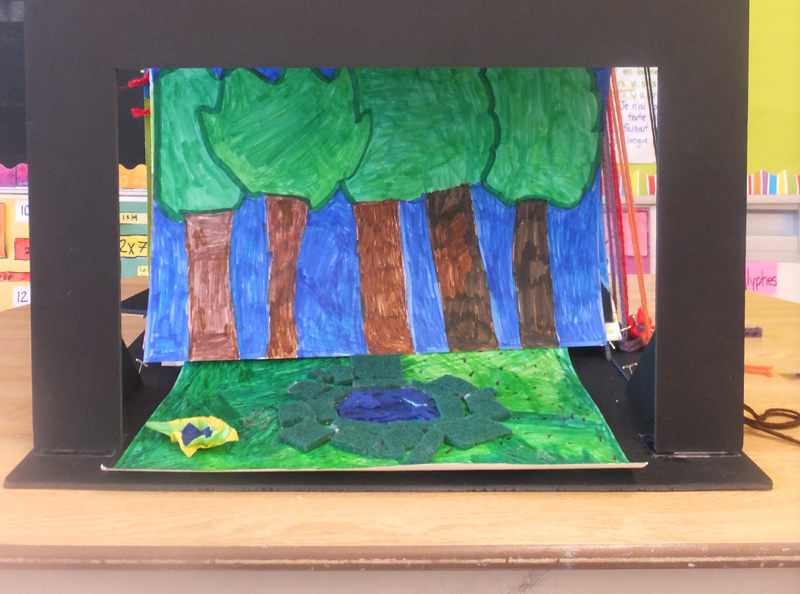 Two split classes combined together to cover structures, pulleys and gears and the forces exerted upon structures.  We built a model theatre together and examined what forces were keeping the structure intact.  Using a script they had created in English class, each group then created two back drops and stick puppets to manipulate within their own miniature fly gallery theatre.  The backdrops were raised and lowered for each groups using bobbins for pulleys 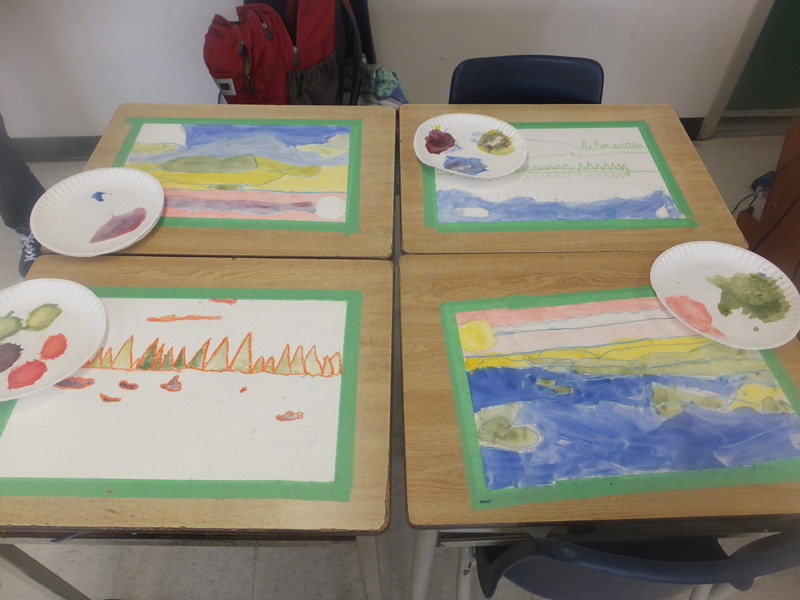 Using the artwork of Ted Harrison for inspiration the students found the basic forms within the photos of the various landform regions of Canada.  The photos were placed within a plastic sleeve and the students used dry erase markers to find the forms.  These shapes were then transferred to the watercolour paper in pencil first then with oil pastel outlines.  The students reviewed colour mixing using only the three primaries and black and white and painted their own interpretation of the landscapes. 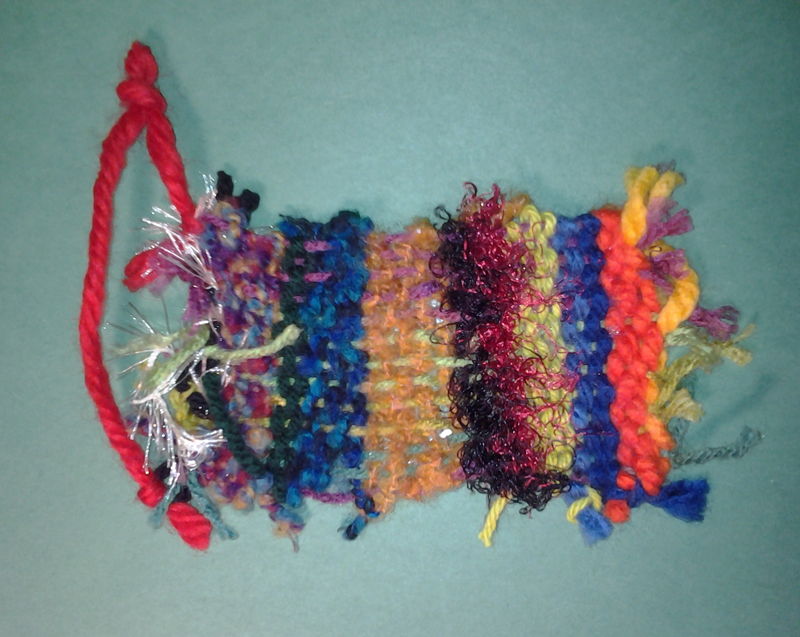 Using a variety of colours and textures, students assigned a piece of wool to each character; hero, villan, wise elder, friend of the hero, as well as a piece of wool  to represent the location and a key action in the scene.  Students worked with the beginning, middle and end of the story.  Once the weaving was complete students could retell their story or use it a tool to write out their story 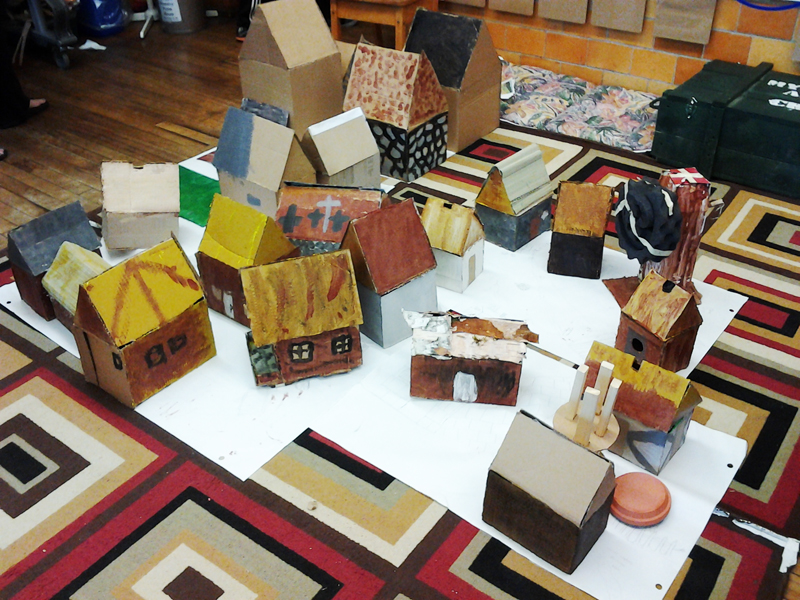 Students were assigned to a societal role within mediaeval times and created a dwelling that would be appropriate to their status.  Students created a map of the village ensuring that there was a source of water and that each of the dwelling structures were in the appropriate location in the village.  Students used a combination of cube and triangular prisms to create the forms 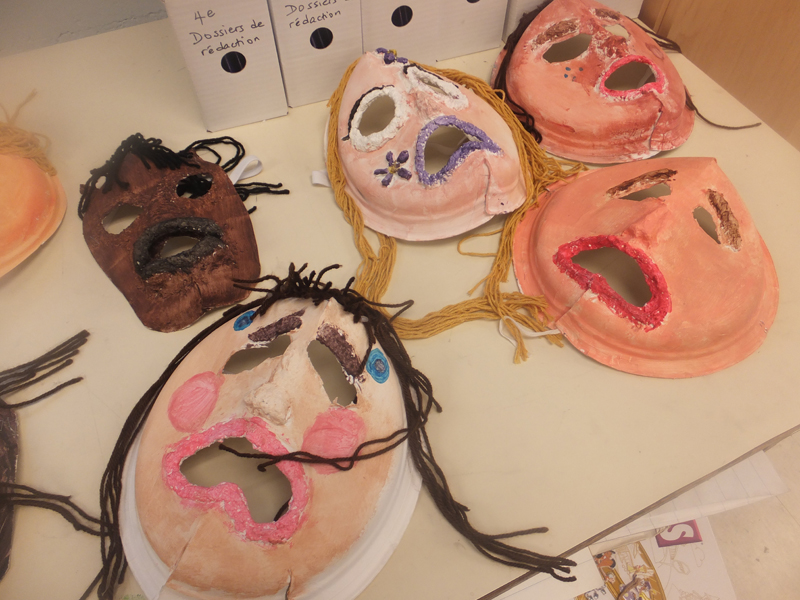 Using the myth of Persephone, students created masks inspired by Ancient Greek theatre masks.  Stiff cardboard plates were the base.  We looked at the ancient Greek amphitheatres and the ensured that the eyes and mouth were large enough to be seen at a great distance.  Once the maskes we complete the student presented a choral retelling of the Persephone in role. 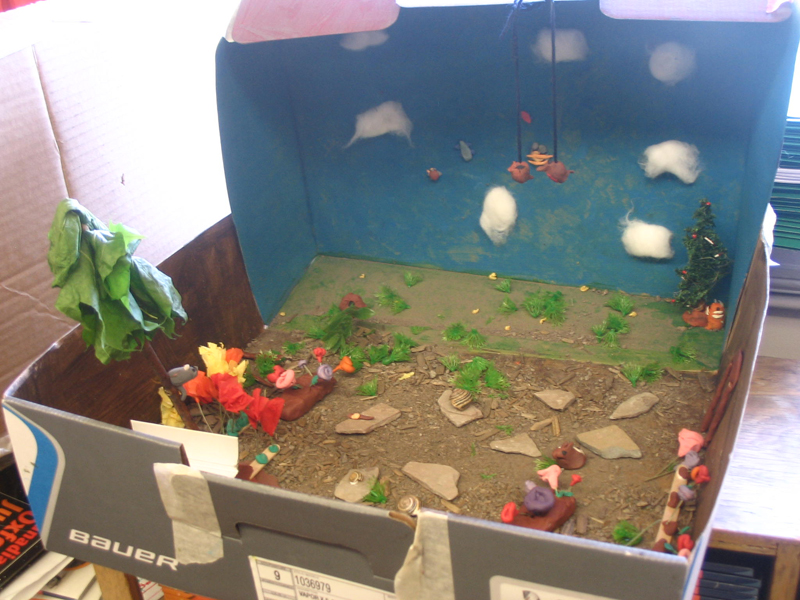 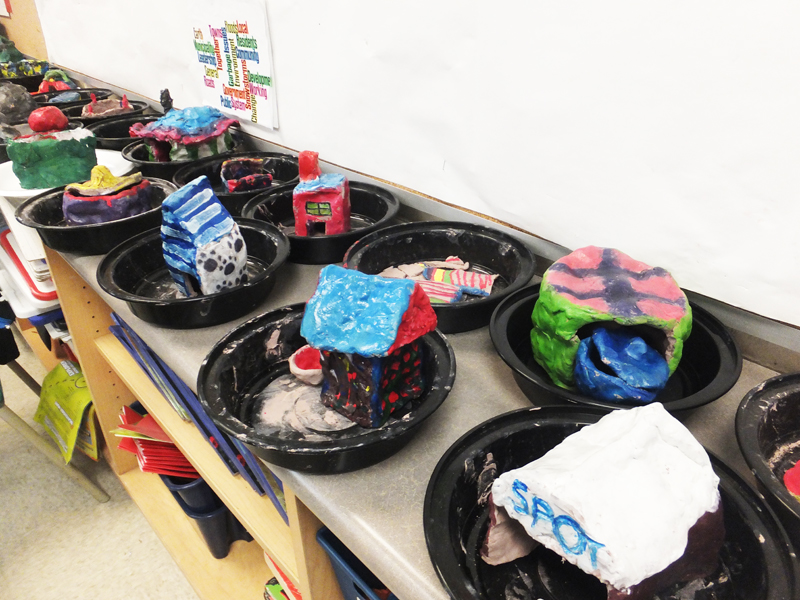 Students examined two forms of structures.  With the clay we looked at how an external form can create a structure, and how to maintain that structure.  Students looked at a variety of fantastic buildings for inspiration and were challenged to find how these buildings might maintain their form.  With the figures we examines how an internal structure; an armature, is used to maintain the form.  The students examine how their own internal armature/skeleton gives us shape and holds us up 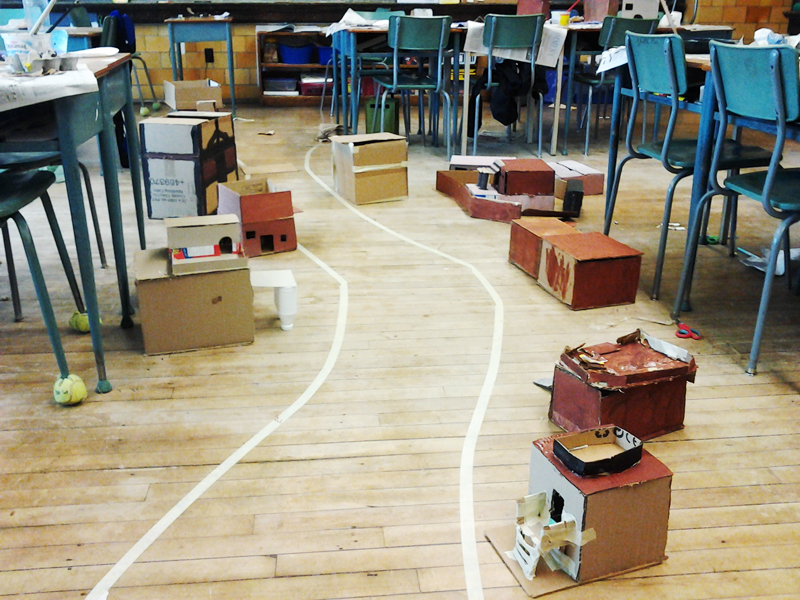 Students were assigned to a societal role within Ancient Eygyptian society and created a dwelling that would be appropriate to their status.  Students created a map of the city ensuring that there was a source of water and that each of the dwelling structures were in the appropriate location in the village.  Students used a combination of cubes to create the forms 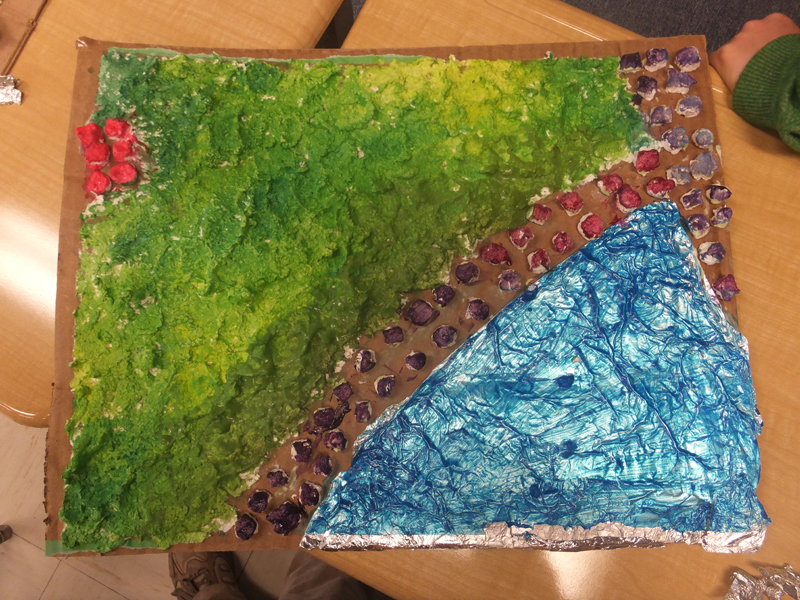 Inspired by the aerial photography and films of Edward Burtynsky, students used Google Maps to examine a location near the school containing a source of water.  Students found the basic forms within the landscape and built up the landscape using Claycrete (papier mache).  Once the landscapes were formed the students were challenged to investigate what kind of animals and organisms might be present in their location.  Representations of these animals formed the border of their landscape pieces.  We asked- what has been the influence on human beings on the water in their region? 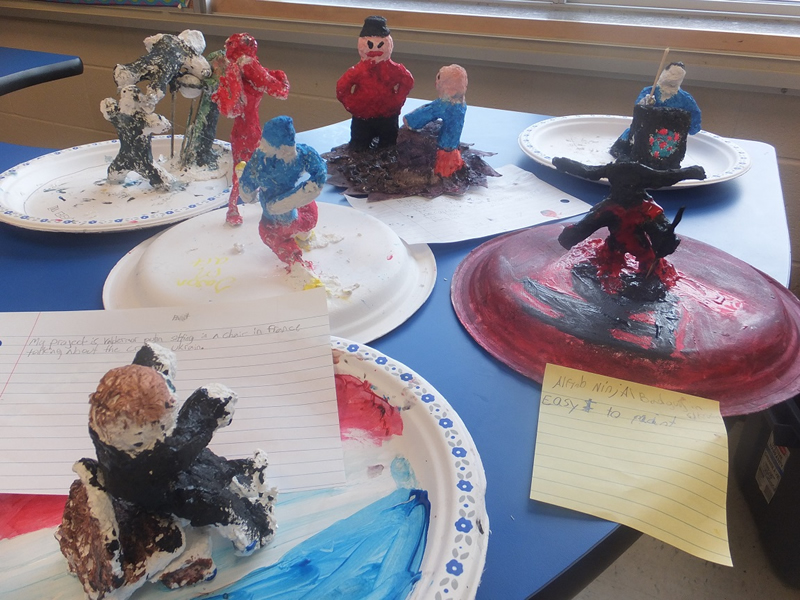 Students were asked to find an issue that was of interest to them and to find an article about this issue.  In a two part process, students were first asked to represent their opinion about the issue using figures or objects. Aluminum foil armatures were created and covered with Claycrete.  The following class the students were asked to represent another opinion of their story.  Sometime this is a little more difficult, but it is important to see more than one side of the story.  Ultimately the two sculptures were brought together to represent the issues.  One sculpture comments upon the other and the sculpture becomes a tool for expression their opinions.