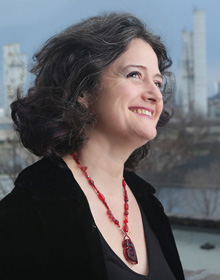 Kelly Wolf is a Theatre Maker, a Set and Costume designer and an Artist Educator who is interested in exploring ways that design can augment the theatrical experience. She has created designs for many theatres across Canada ranging from small independent companies to the major festivals. Most recently designing Berlin Blues at the Blyth Festival and A Christmas Carol at the Grand Theatre. Upcoming: Hook Up a new opera with Tapestry Music Theatre and Hare and Tortoise with Carousel Players.

Recent work has taken her into the realm of site specific theatre creation. Kelly has worked in collaboration to create One Small Drop, inspired by the textile workers of the Imperial Cotton Company and In Sight investigating the effects of a stroke and perception at the Art Gallery of Hamilton. Her most recent site-specific collaboration, HERE, took Kelly to Barton St in Hamilton to explore gentrification and change in that neighbourhood.

Kelly enjoys working in the academic setting as well; recent designs include Legally Blonde, In the Heights, Spring Awakening, Oklahoma and The Drowsy Chaperone – Sheridan, Playground, TYA 2015, Caucasian Chalk Circle, Swimming for Shore – Humber, South Pacific and Drama at Inish – Redeemer. Eurydice, Scenes from an Execution - University of Waterloo. Kelly is an instructor at Brock University and has taught and mentored students at Humber College and Ryerson Theatre School. Kelly is a graduate of York University (BFA) and the University of Toronto (MA) as well as the Central Saint Martins College of Art and Design. Member of ADC.